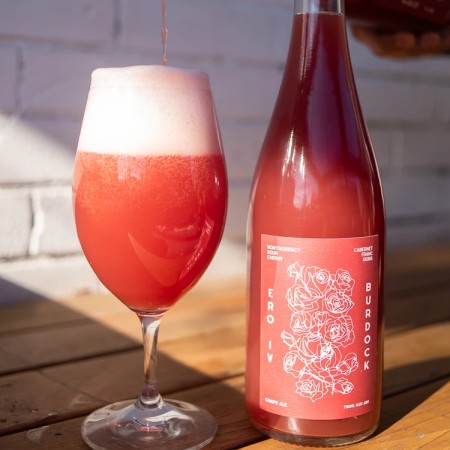 TORONTO, ON – Burdock Brewery has announced the release of the latest edition of ERO, an annual(ish) series of beers that pay “eternal and undying tribute to the heavenly Montmorency Sour Cherry.”

To make ERO IV we took prime mixed-fermentation saison and aged it on passionately foot stomped (not pressed) 2019 Cab Franc skins from Niagara-on-the-Lake. After a solid 5 months of soaking in those gracious grape flavonoids, we aged it for another 30 days on our favourite fruit of all time (ok top 3), righteous ruby of the prunus family, the all powerful Montmorency Sour Cherry.

This beer is Delicious. It’s medium tart with lots, I repeat lots, of sour cherry character. It has great crunchy texture from its repose on Cab Franc skins and it has a bit of spontaneous-esq delight from whatever microbes were present on the skins of the grapes and cherries (very krieky).

ERO IV is available now in 750 ml bottles and a very limited number of 1.5L magnums at the Burdock retail shop and online store.