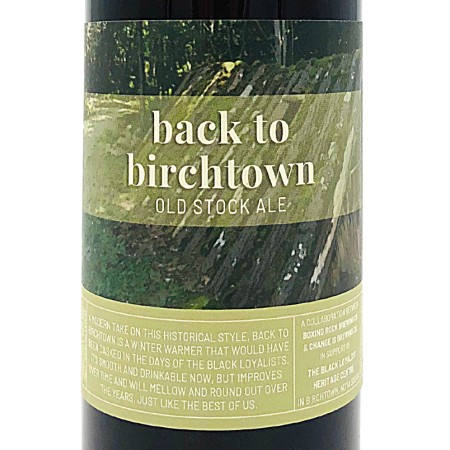 SHELBURNE, NS – Boxing Rock Brewing has announced a new collaboration with Change is Brewing, a BIPOC collective in Nova Scotia that “partners with local breweries to promote diversity & inclusion in the craft beer, food & service industry.

Back to Birchtown Old Stock Ale (6.4% abv) was brewed “to bring focus and increased awareness to the historical presence of Black Loyalists in Nova Scotia,” as explained in the release announcement:

The Black Loyalists, a group of more than 3,000 free or formerly enslaved Black people who fought for the British in the American Revolution, settled in Nova Scotia between 1783 and 1785. The story of the Black Loyalists – how they served the British in the war in exchange for the promise of freedom in peacetime, and how they travelled to Nova Scotia only to endure hardships of slavery, indentured servitude, landlessness and hunger – is one of the great stories of Canadian history.

The beer has the following description:

Back to Birchtown is an Old Stock Ale, amber in colour and 6.4% ABV. A modern take on this historic style, Back to Birchtown is a winter warmer that would have been casked in the days of the Black Loyalists. It is smooth and drinkable now but has been designed and brewed to improve over time and the flavours will mellow and round out over the months and years, just like the best of us.

Back to Birchtown will be officially launched this Saturday February 27th at the Boxing Rock brewery taproom in Shelburne. It can also be pre-ordered now via the brewery online store in a special package that includes a bottle of Back to Birchtown, a limited edition Boxing Rock/Change is Brewing mask, and a ticket for admission to the Black Loyalist Heritage Centre.

All proceeds from sales of the beer and the package will be donated to the Change Is Brewing Collective and the Black Loyalist Heritage Society.