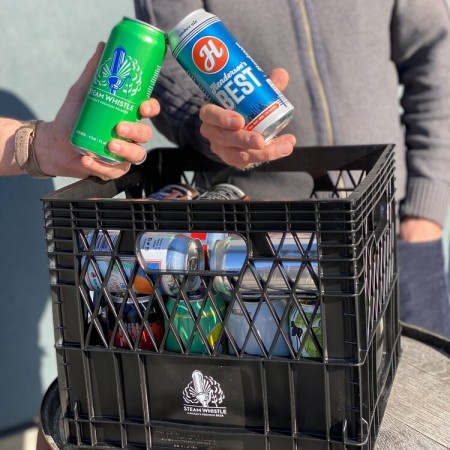 TORONTO, ON – Steam Whistle Brewing has announced the release of second edition of the multi-brewer Biergärten Craft Beer Crate, with this month’s package curated by Henderson Brewing.

Each crate contains 28 cans of beer from a variety of Ontario breweries – including Steam Whistle and Henderson – along with Bavarian-style pretzel kit and a small jar of Pilsner Mustard. An optional upgrade to replace the pretzel with a sausage meal kit is also available.

Biergärten Craft Beer Crate Vol. 2 will be available to purchase starting at 12:00 noon today (March 9th) via the Steam Whistle online store for $99.95 plus $7 crate deposit, and an additional $16 for the sausage meal upgrade. All orders include delivery in the Greater Toronto Area.

For more details including an Q&A with Henderson Brewing, see the blog post announcing the release.