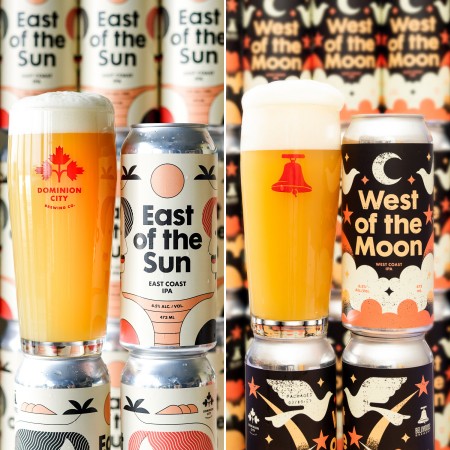 OTTAWA, ON & TORONTO, ON – Dominion City Brewing and Bellwoods Brewery have announced the release of a cross-province collaboration on a pair of beers brewed with the same ingredients but different recipes.

Brewed in the East Cost style with Amarillo and Simcoe hops, East of the Sun IPA is hazy in appearance, lusciously tropical, creamy and smooth.

A West-ish Coast IPA with Cali ale yeast, a hard water profile, and a relatively high bittering hop addition. (Don’t @ us, ours is a tad hazy).

Both beers are available now at their respective brewery retail stores and online shops. Dominion City will also be offering the Bellwoods beer in its Friends of the Dominion shop later this week.