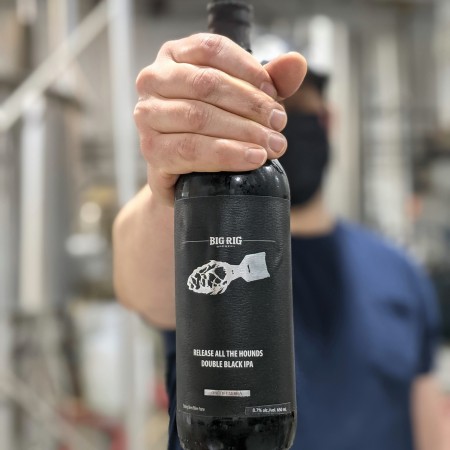 OTTAWA, ON – Big Rig Brewery has announced the launch of a new Limited Edition One Off Series with a amped-up variant of one of its award-winning core beers.

Release All the Hounds Double Black IPA (8.7% abv) is described as follows:

To commemorate our first gold-medal entry at the Canadian Brewing Awards, we brewed an imperial version of our Release The Hounds Black IPA. Loads of Galaxy hops are complimented with a sprinkling of Simcoe and Citra, giving your nose an aroma that’s sticky with tropical fruits and citrus. A strong but balanced bitterness compliments a roasty malt character, with a finish reminiscent of fruit cake (but the good kind). Though hefty in abv, this beer is smooth, roasty and deliciously hoppy.

Release All the Hounds is available now at the Big Rig retail store in Kanata and online shop.