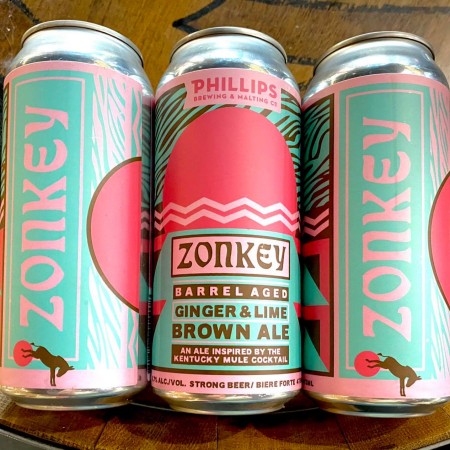 VICTORIA, BC – Phillips Brewing has announced the release of a limited edition beer inspired by the Kentucky Mule cocktail.

This beer came together from a blend of two separate batches. First, we brewed a rich, robust brown ale crafted with four different malts that feature subtle chocolate and brown sugar maltiness, with a pleasant bitterness and hints of vanilla and hazelnut. This batch then spent the better part of 5 weeks aging in freshly emptied Heaven Hills bourbon whiskey barrels. We then brewed up a second batch of the same brown ale base, this time layering in freshly ground ginger and zesty lime juice. After the appropriate aging time, we blended the barrel-aged brown ale casks and the spiced, fruited batch together. The result: an extremely drinkable brown ale that’s bubbly, bright and bold, with zingy lime punch and a spicy whiskey finish.

Zonkey is available now at the Phillips retail store and online shop, and select private liquor stores in BC and Alberta.