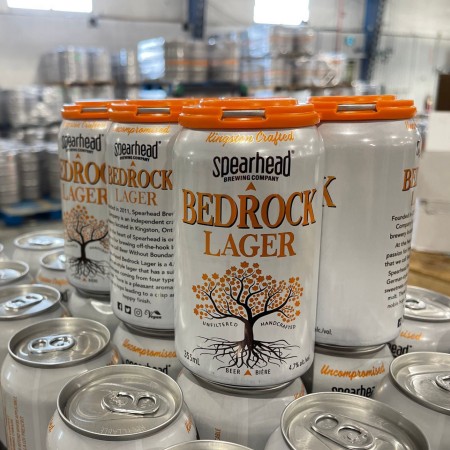 KINGSTON, ON – Spearhead Brewing has announced the first release in its new Vault Series, which will see the brewery “take some of our classics out of retirement for a short period of time.”

First up is the return of Bedrock Lager (4.7% abv), which was the first beer developed when Spearhead opened its bricks-and-mortar brewery in Kingston three years ago. It’s described as follows:

This traditional unfiltered German-style lager has a subtle sweetness coming from a blend of four types of malt. Brewed without the use of any adjunct sugars, this lager is malt forward yet crisp with the floral and grassy aromatics of German noble hops leading to a delicate hoppy and dry finish.

Bedrock Lager is available now at the Spearhead retail store and online shop.