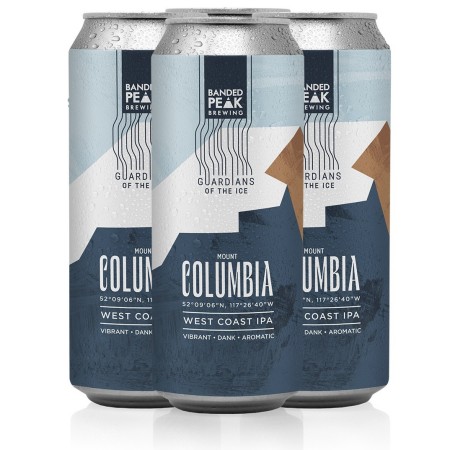 CALGARY, AB – Banded Peak Brewing has announced the launch of a new series of beers in support of Guardians of the Ice, a non-profit organization with a mission to “inspire dynamic environmental stewardship on behalf of the rapidly retreating Columbia Icefield (Canadian Rockies) and its watersheds, leading to a low-carbon future for the whole planet.”

Mount Columbia West Coast IPA – described as “vibrant, dank, aromatic” – is the first of twelve IPAs that will be featured in the series, each of them named after a different peak in the Icefield.

The launch of the series will be marked with a livestream event on Friday March 26th at 7:00 PM MST via the Banded Peak YouTube channel, featuring Guardians of the Ice founder Jim Elzinga, extreme skier Dylan Cunningham, and Banded Peak brewer Mark Zabot.

Mount Columbia West Coast IPA will be available on Monday March 22nd at the Banded Peak retail store and online shop, and select beer retailers in Alberta. $2 from every four-pack sold will be donated to support Guardians of the Ice.