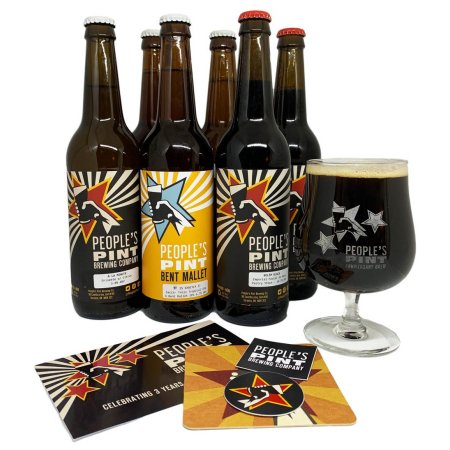 TORONTO, ON – People’s Pint Brewing has announced that it is marking its 3rd anniversary this month with a special package of three new limited edition beers.

This beer was conceived of by David Coleman, our Sales Manager. “I love ‘little beers’, especially grisettes. They’re sessionable but complex enough to not be forgettable. We added blood orange, grapefruit and lime because that’s what was freshest at the market that morning.” If you are unfamiliar with the style, a Grisette is a low alcohol beer that comes from the regions along the border of France and Belgium. They are actually a subset of a better known farmhouse-style ale; the Saison.

The beer was brewed by Angie, Chris, Deaglan and Meg also known as Bent Mallet Brewing. In case you hadn’t figured this out they are huge Futurama and Simpson’s fans. π is Exactly 3! For this special anniversary IPA, we wanted to bring you the best of both coasts – the juiciness of the East Coast with the bitterness and dryness of the West Coast. Add in the Sacch Trois yeast (and it had to be Trois, this is for the 3 year after all) which brings its own bright fruitiness, and all those qualities get amped up.

The Bèlem bakery in Lisbon Portugal is the birthplace of the famous custard tarts also known as Pastel de Nata. One of our co-founders Doug went to Portugal last year and fell in love with these delightful pastries. He vowed upon his return that he would convince his partner and brewmaster Peter to brew a beer inspired by them. So together they did just that! This is the first big pastry stout we’ve attempted at the brewery, and it didn’t disappoint. It has aromas of burnt sugar, specialty coffee and almonds, with flavours of crème brulée, black liquorice, vanilla and a whisper of cinnamon. This beer lives up to its pastry stout name, it is dessert in a glass, silky with a very sweet finish.

The People’s Pint Third Anniversary Pack – featuring 2 x 500 ml bottles of each of the three beers, an engraved 16 oz tasting glass, and “a few little extras” is available now at the People’s Pint retail store and online shop while supplies last.