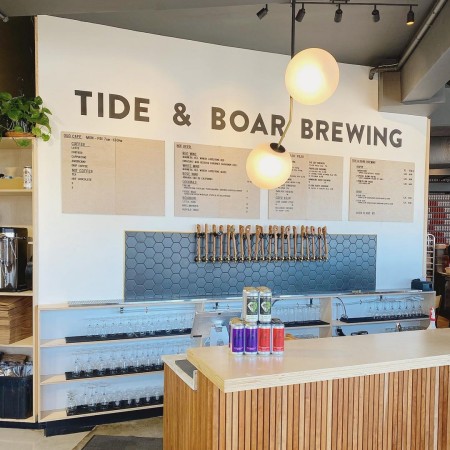 MONCTON, NB – More than a year after it was first announced, Tide & Boar Brewing has opened its new taproom and restaurant location in Moncton.

Originally a nanobrewery in the basement of Moncton’s Tide & Boar Gastropub, the brewery is now much larger but retains its focus on “modern brewing styles and some twists on classics”, with an opening line-up that includes Uncut Hops IPA (6.8% abv), Special Blend #10 IPA (7% abv), and two variants on Sour Otis (5.5% abv), one with raspberry and peach, and the other strawberry and rhubarb.

The taproom also features several guest taps pouring beer and cider from other Maritime breweries, a selection of wine and cocktails, and a food menu including pizza, wings, burgers, sandwiches, and other beer-friendly items. For take-away sales, house-brewed beers can be purchased in cans, crowlers, growlers, and kegs.

Tide & Boar Brewing is located at 1355 Main Street in Moncton, and is open Wednesday to Saturday. The site also includes a location of Duo Cafe which serves breakfast and lunch from Monday to Friday. For more details including full business hours, see the brewery website and Instagram page.