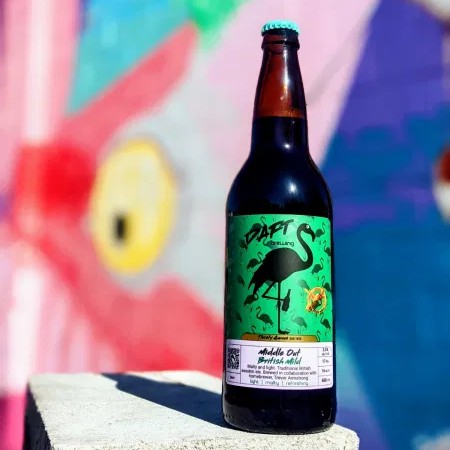 KINGSTON, ON – Daft Brewing has announced the release of the winning beer from its first annual Thirsty Games homebrewing competition which took place late last year.

Middle Out British Mild (3.5% abv) was created by Durham Homebrewers Club member Trevor Armstrong, and is described as follows:

Middle Out is a traditional British Dark Mild, with a glorious brown hue. It is malt forward but finishes light and easy. Clocking in at 3.5% ABV, this beer is very sessionable meaning that you can easily crush pints on our patio all summer long.

“The first thing you will notice with Middle out is that it’s not as sweet as most dark beers.” explained Daft Sommelier Nathan, “On your first sip you will get a lot of malt character upfront, followed by subtle notes of plum and dried fruit and a hint of tobacco. Those flavours don’t linger long as it finishes with a nice crisp finish.”

Middle Out is available now at the Daft Brewing retail store and online shop.