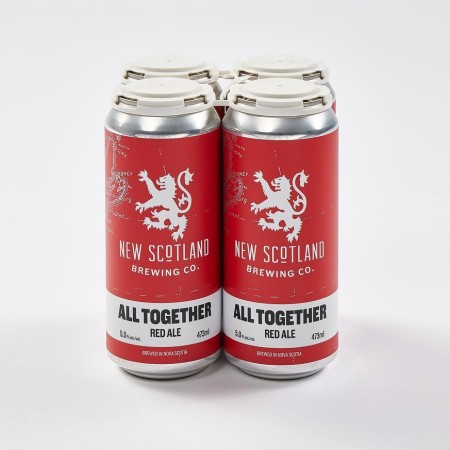 DARTMOUTH, NS – New Scotland Brewing has announced the release of a new beer to raise funds for a cause that is especially meaningful for the brewery.

All Together Red Ale (5% abv) is described as follows:

All Together gives you graham cracker, biscuit-like malt character and fruit-forward hop character. It’s darker and more malty than an American Pale Ale with noticeable hops flavour, aroma, and bitterness brought to you by Amarillo and Galaxy hops. Think crackers and jam.

Partial proceeds from its sales, as well as those of a corresponding t-shirt and hoodie released by the brewery’s sibling business New Scotland Clothing, will be donated to the MS Society of Canada to aid its fight against Multiple Sclerosis, a disease that company co-founder Kevin Saccary was diagnosed with more than a decade ago.

“We want people to be aware of how prevalent this disease is in Canada,” says Saccary in a statement. “Atlantic Canada has one of the highest rates in the world with over 7,000 diagnosed cases. Tremendous progress is being made – and we want to keep the momentum going in the right direction. We really do believe that we can make a difference in understanding, awareness, compassion and quality of life for those affected.”

All Together is available now at the New Scotland retail store and online shop.