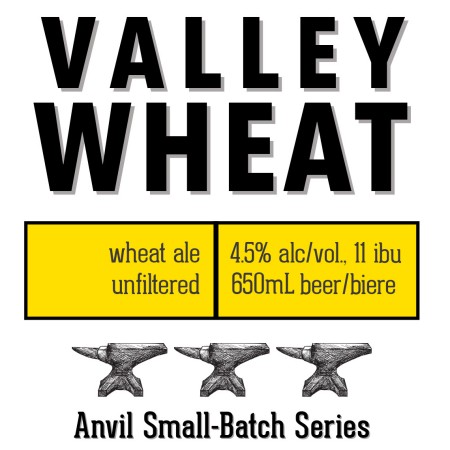 DUNDAS, ON – Shawn & Ed Brewing has announced the return of a “perennial favourite” as the latest release in its Anvil Small-Batch Series of limited edition beers.

Valley Wheat Ale is a hazy, highly carbonated beer, low in hop aroma & bitterness. Made with 45% malted wheat, it exhibits a tart, fruity flavor with a complex estery aroma. The aroma is a combination of vanilla, banana, clove, spices and fruit, all of which would be unwelcome in many beers but are quite natural in a wheat beer. The malted wheat adds both a tart bite and a malty component that gives a wheat beer depth. The yeast in the bottle, which can be re-suspended by swirling the bottle contributes to the haze and the flavour.