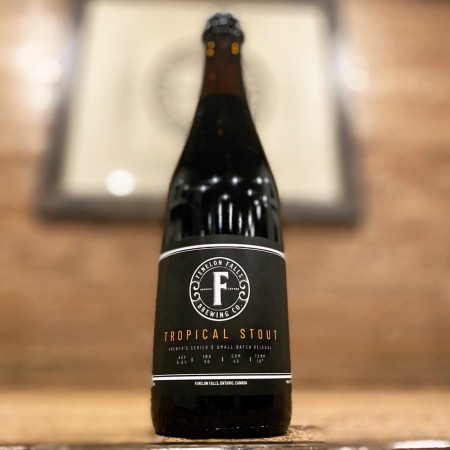 Tropical Stout (5.6% abv) is the last in a set of four beers brewed with lager yeast that were release on a weekly basis through March and early April. It’s described as follows:

You may be forgiven in thinking our fourth style of our Brewer’s Series is greatly out of place, as most stouts are brewed with ale yeast. Tropical Stouts are often brewed with lager yeast, as is ours. Lager yeast fermented at higher temperatures is a common occurrence in the days of tropical or subtropical brewing before temperature control was effectively controllable. Various roasted and crystallized malts coalesce into the rich black colour, and with the aforementioned high-temperature fermentation leaves a lasting, moderate sweetness. This recipe includes an addition of molasses, which is partially consumed by yeast, further contributing to the equatorial confectionary delight.

Tropical Stout is available now at the Fenelon Falls retail store and online shop, along with the previously released Milkshake Lager, Rauchbier, and Biere de Garde.