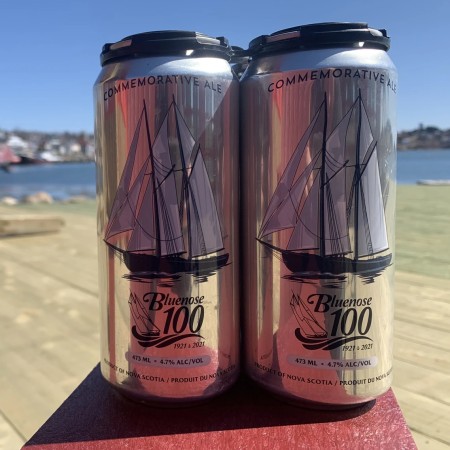 MAHONE BAY, NS – Saltbox Brewing has announced the release of a new beer in honour of a Nova Scotia icon.

Bluenose 100 Commemorative Ale (4.7% abv) marks the 100th anniversary of the launch of the original Bluenose schooner, and is described as follows:

The challenge for Saltbox was to brew a craft beer which would be popular but rooted in craft beer traditions. We chose to make a true Canadian Maritime Ale based in brewing lore from the Prohibition era. A light, crisp and most importantly refreshing beer, the Bluenose 100 Commemorative Ale was brewed using Canadian malt, noble hops, and the desire to create something that would honour the legacy that is the fabled fishing schooner herself, The Bluenose. On the palate you’ll experience a distinctive aroma of malty sweetness with a smooth, clean finish that will leave you dreaming of the high seas sip after sip after sip.

Bluenose 100 Commemorative Ale is on tap now at The Knot Pub in Lunenburg, and The Nosy Crow in Mahone Bay. It will be available soon at Saltbox Brewing and NSLC locations throughout Nova Scotia. Partial proceeds will go to support the Bluenose 100 committee, which will be holding events throughout 2021.