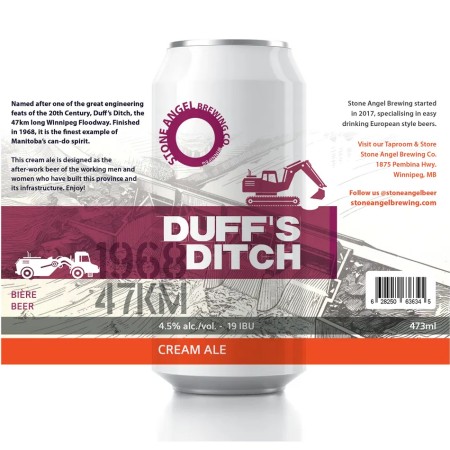 WINNIPEG, MB – Stone Angel Brewing has announced the launch of a new beer that is “named after one of the great Canadian engineering feats of the 20th Century.”

Originally finished in 1968, the 47km long Winnipeg Floodway (nicknamed Duff’s Ditch after Premier Duff Roblin) is the finest example of Manitoba’s can-do spirit – built by one political party, later extended by another. This cream ale is designed as the after-work beer of the working men and women who have built this province and its infrastructure. Nothing fancy, a straight-up beer for straight-up folks, a beer for after a days work. Enjoy!

Duff’s Ditch is available now at the Stone Angel taproom and online shop, and soon at select beer retailers and licensees.