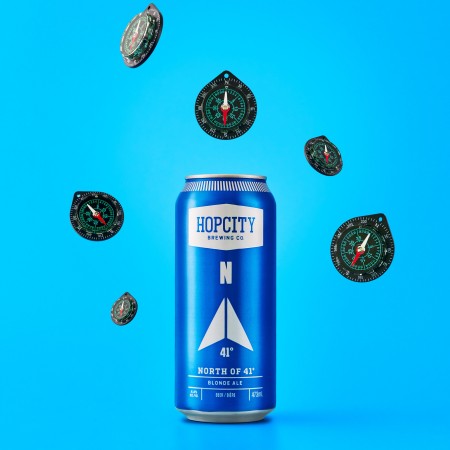 BRAMPTON, ON – Hop City Brewing has announced the packaged debut of a beer created in partnership with restaurant company Recipe Unlimited.

North of 41° Blonde Ale (4.4% abv) was previously available exclusively on tap at Recipe Unlimited owned restaurants, but is now being distributed in cans. It’s described as follows:

North of 41° is inspired by the story of the most southern point in Canada, Middle Island, which sits at 41 degrees latitude in Point Pelee National Park in southern Ontario. In addition to serving as a compass for all Canadians – after all, no matter where you are in the country, you’re North of 41° – the beer is intended to inspire a spirit of exploration and discovery in every beer drinker.

North of 41° is an easy-drinking blonde ale – layered with complex hoppy aromas and flavours ranging from tropical fruit to stone fruit and citrus. Every sip leaves you with a lasting impression of delicious hoppy flavours without the lingering bitterness. At 16 IBU and 4.4% ABV, North of 41° is precisely balanced, refreshing and leaves you wanting more.

North of 41° is available now at select LCBO and Beer Store locations in Ontario, with each can featuring a QR code that can be scanned to take a virtual trip to Middle Island via an augmented reality app.