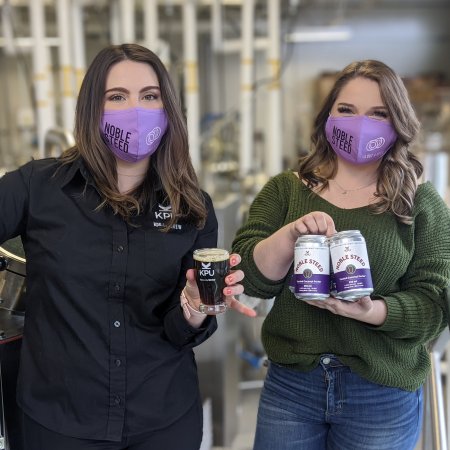 LANGLEY, BC – The Kwantlen Polytechnic University (KPU) Brewing Program has announced this year’s signature recipe beers brewed by second year students as a part of their final semester in the program.

The beers come from four teams of students in the Class of 2021, and include the following:

Peak Fusion combines the IPA or Belgian wheat beer styles together. This delicious beer fuses Belgian yeast with North American hops while adding notes of spice balanced with citrus and a robust bitterness.

The Noble Steed Toasted Coconut Porter takes caramel and chocolate flavours and enhances them with a little nuttiness from toasted coconut.

Mango Lore blends a smooth wheat body with mango puree for a fruity burst that’s sure to make it feel like summer.

A combination of hops gives the dry, sparkling and refreshing Quench Wave Brut IPA aromas of citrus and guava with a spicy kick of ginger.

“The capstone project is an opportunity for our second-year brewing diploma students to shine and use everything they’ve learned about making beer over the last two years to showcase their skills and talent in their signature-recipe beer,” says Alek Egi, chair of the KPU brewing and brewery operations program in a statement. “They create and brew it all on their own and are graded on the quality and taste of their beer, as well as how they market and sell their product.”

All four beers will be officially launched tomorrow (April 23rd), and will be available to purchase at the KPU Brew Lab.