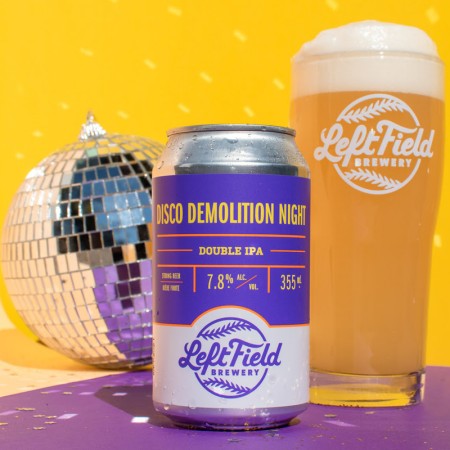 TORONTO, ON – Left Field Brewery has announced the return of a beer that commemorates an infamous night in both baseball and music history.

Disco Demolition Night (7.8% abv) has the following backstory and description:

Disco Demolition Night was a double-header at Comiskey Park in Chicago on July 12, 1979. Admission was discounted to 98¢ for attendees who turned in a disco record that was to be destroyed between games. Things obviously got out of hand and the field was damaged in the explosion and the riot that ensued, forcing the White Sox to forfeit the second game.

Commonly referred to as the ‘Night That Disco Died’, this event was homophobic, racist and sexist from the start. A primarily white crowd destroyed music predominately made (and made popular) by gay, female, Black and Latin artists.

With this re-release we choose to celebrate the music that was destroyed that evening (disco, but also funk, R&B and more) and re-imagine what the evening could and should have been – a big disco dance party that celebrated this music and the people who created and enjoyed it. And disco didn’t die! It evolved into dance and house music, and hundreds of other genres beyond that we still enjoy today.

Disco Demolition Night is available now at the Left Field retail shop and online store, and the brewery has created a Spotify playlist of disco, funk and R&B classics to enjoy along with the beer.