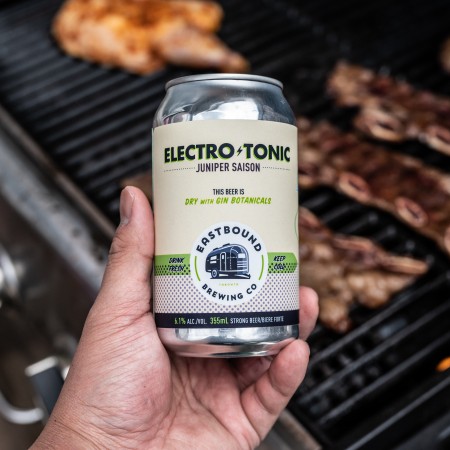 TORONTO, ON – Eastbound Brewing has announced the return of an old beer under a new name for its pending LCBO release.

Electro Tonic Juniper Saison (6.1% abv) was previously known as Nerve Tonic, and is described as follows:

If you were an avid fan of Nerve Tonic you have nothing to fear, because the recipe remains intact. It’s still a vibrant Saison which incorporates gin inspired botanicals, layering juniper, coriander, cardamom, orange and lemon peel on top of a depth of yeast driven white and black pepper. The juniper sits heavy on the nose, providing an herbaceous front which gives way to spice, and an incredibly dry finish that is further brightened with notes of citrus.

Electro Tonic is available now at the Eastbound Brewing retail store and online shop, and soon at select LCBO stores in Ontario.