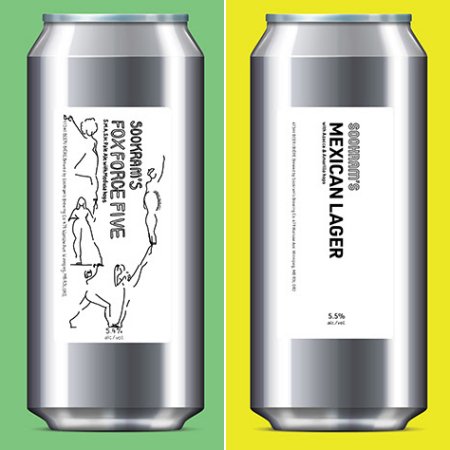 WINNIPEG, MB – Sookram’s Brewing has announced details of two new small batch beers that will be released tomorrow (May 7th).

The women of Sookram’s got together on International Women’s Day and brewed up this S.M.A.S.H. Pale Ale with Medusa hops. Grown in Colorado and New Mexico region, the most striking feature of Medusa hops is its multi-headed cone. These low alpha hops deliver subtle characteristics of guava, melon, apricot and citrus fruit.

The recipe is influenced by North American brewers attempting to replicate beach drinking lagers. Steeped in tradition as well, we used corn for a large part of the malt bill to impart the crackery corn flavour typically found in these summer sippers. We put our own Sookram’s spin by adding some new world hops with Azacca and Amarillo to give the beer a subtle hop aroma.

Both beers will go on sale tomorrow at 10:00 AM via the Sookram’s online store. $2 from each can of Fox Force Five will be donated to Fort Garry Women’s Resource Centre.