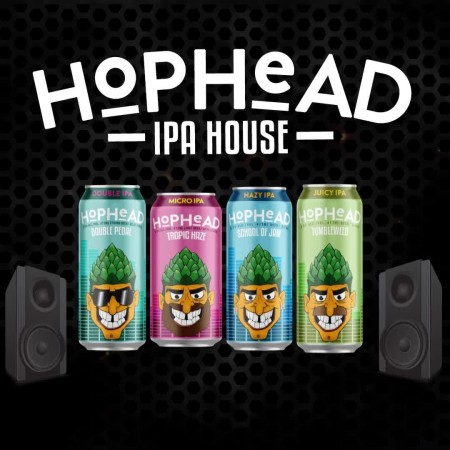 CALGARY, AB – Big Rock Brewery is getting set to officially launch of a new series of beers dedicated to “mixing experimental hops and specially-curated playlists to create a loud House of IPAs.”

The Hop Head IPA House series takes its name and original inspiration from Hop Head IPA, one of the Tree Brewing brands that Big Rock purchased the rights to several years ago.

The brand now encompasses a new quartet of beers, each with an accompanying Spotify playlist.

There’s a high degree of cloudiness that bring in a tropical storm of hops, headlining this act are notes of mango, coconut and stone fruit. [playlist]

This hazy IPA takes samples from the beats and basslines of a west coast IPA with an unfiltered approach. [playlist]

Hazy, juicy little IPA that tunes in low at 3.5% but don’t be fooled, the notes of orange, vanilla and pineapple crank this IPA out and still leaves room for an encore. [playlist]

You might be familiar with the hook of this DIPA but you haven’t experienced the melody. Notes of tropical fruit, citrus and earthy pine sensations. [playlist]

The Hop Head IPA House series will be available soon at Big Rock retail stores and other liquor retailers in British Columbia, Alberta, and Ontario.