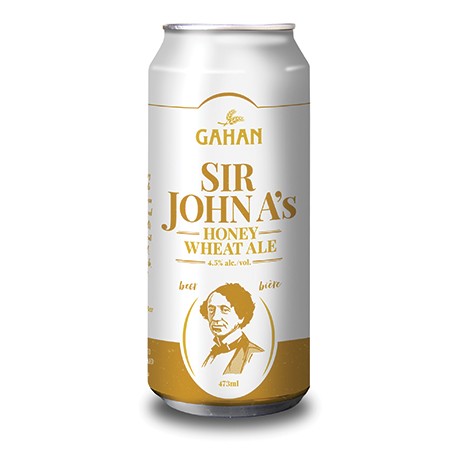 CHARLOTTETOWN, PE – PEI Brewing has announced plans to rename Sir John A’s Honey Wheat Ale, one of the flagship brands in its Gahan Beer line, with an aim to “be a part of the solution towards contributing to a more inclusive and considerate community.”

The statement issued by the brewery is as follows:

The decision to rebrand was part of the company’s response to the ongoing issue of Sir John A MacDonald and his role in Canadian history, and came after a series of meetings with L’nuey, an initiative focused on protecting, preserving and implementing the constitutionally entrenched rights of the Mi’kmaq of Prince Edward Island (Epekwitk).

Kevin Murphy, CEO, said “It was important for us to consult with L’nuey, not only regarding the rebrand of Honey Wheat Ale, but on how we can contribute to education and inclusivity within our community”. Added Murphy, “We are looking forward to continuing this work with L’nuey and being a part of the solution toward Reconciliation.”

The company will be updating the historical information on plaques showcased in their Taproom in an effort to help tell the full story of the damaging policies put in place by Canada’s first Prime Minister. To contribute toward L’nuey’s goal of expanding land recognition, they will also be adding signage to their Events Centre acknowledging the land on which we gather is the traditional and unceded territory of the Mi’kmaq.

Chief Junior Gould of Abegweit First Nation remarked “Not only is the re-branding a milestone in Epekwitk, it’s also a great show of respect to the Mi’kmaq and all First Nations. It shows all Islanders that finding a way to make a difference and being a part of the solution is really a decision – ‘Do I want to take action?’ ‘Do I want to be a part of the solution?’ The answer in this case was yes, and we are proud to witness this example of true Reconciliation today.”

Added Chief Darlene Bernard of Lennox Island First Nation, “We are delighted to see such progress and action towards reconciliation taken by PEI Brewing Company. This is an excellent example of how to acknowledge past mistakes and take steps to reach out to make the changes necessary to start a new chapter. This company has deep connections and widespread recognition on Epekwitk (PEI), and to use their influence and reach to educate and make positive change for the Epekwitk Mi’kmaq and all Islanders speaks volumes.”

A new name for the beer has yet to be announced, but is expected to be put into use later this year.