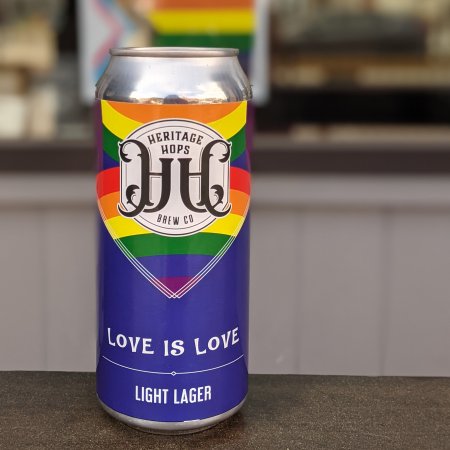 STRATFORD, ON – Heritage Hops Brew Co. has announced the release of a limited edition beer for Pride Month in support of PFLAG Canada.

Love is Love Light Lager (4% abv) is a specially repackaged version of the brewery’s It’s Noon Somewhere Light Lager, which is described as follows:

This easy drinking combination of a Czech pilsner and an American-style light lager is the perfect beer year-round. Clean, crisp and extremely refreshing – without skimping on flavour.

Love is Love will be available at the Heritage Hops retail store for the month of June, with 10 cents from each can sold going to PFLAG to help its mission to “provide resources, support, and education about gender identity, gender expression, and sexual orientation.”

In addition to this new release, Heritage Hops has announced all four of its core brands – Perth County Conspiracy Pale Ale, Abandoned At The Altar Raspberry Sour, 21 Haze IPA, and It’s Noon Somewhere Light Lager – are now available at Beer Store locations throughout Southwestern Ontario, and Perth County Conspiracy is on the shelves at select LCBO stores.