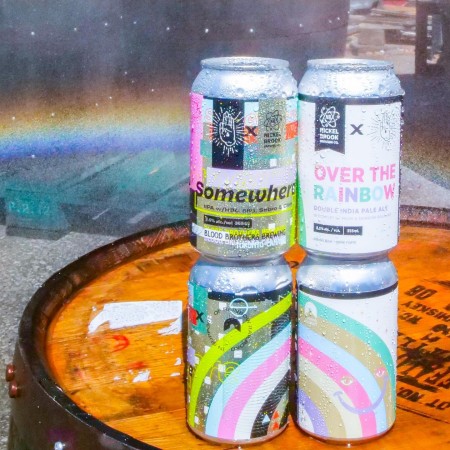 TORONTO, ON & HAMILTON, ON – Blood Brothers Brewing and Nickel Brook Brewing have announced the release of a pair of beers brewed via a virtual collaboration especially for Pride Month.

Somewhere (8.5% abv) and Over The Rainbow (8.5% abv) where brewed by Blood Brothers and Nickel Brook respectively, with both of them featuring experimental hop HBC 586.

Somewhere also includes Sabro and Citra, and “showcases aromas of lychee that flow seamlessly into white grapes and stone fruit on the palate,” while Over The Rainbow features the addition of Citra, Nelson Sauvin and Galaxy.

Somewhere is available now at the Blood Brothers retail store and online shop, and Over The Rainbow can be purchased in person and online from Nickel Brook. Proceeds from both beers will go to Rainbow Railroad, an organization that helps LGBTQI+ individuals escape violence and persecution in their home countries by relocating them to safer places.