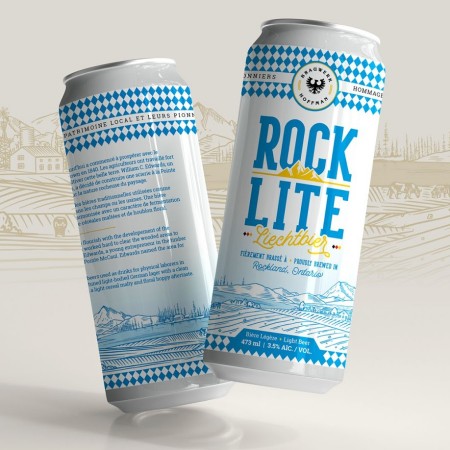 ROCKLAND, ON – Brauwerk Hoffman Rockland has announced the release of a new beer that is “a thank you to the Rockland community for their continued support since our opening in November 2020.”

‘Sticking to the German theme of the brewery we decided to pay homage to some of Clarence-Rockland’s rich history with a traditional German beer. The Rockland we know today started to take shape with the development of the L’Orignal-Bytown road in 1840. Local farmers worked hard to clear the wooded area to cultivate this beautiful land. William C Edwards, a young entrepreneur in the timber industry named the area for the rocky nature of its landscape. Liechtbier (“light beer’’) were traditional beers used as drinks for laborers in fields and factories because of their low alcohol content. A pale, smooth light-bodied German lager with a light cereal malty and noble floral hoppy taste with a nice dry finish. Prost!

The beer’s can features artwork by local family-owned company Louis-XVI Design, and the project came together with the support of Mario Zanth, city councillor, and Karl Parent, president of the Clarence-Rockland Chamber of Commerce.

Rock Lite will be officially released on Thursday June 3rd, and will be available at the Brauwerk Hoffman retail store, and local bars and restaurants.