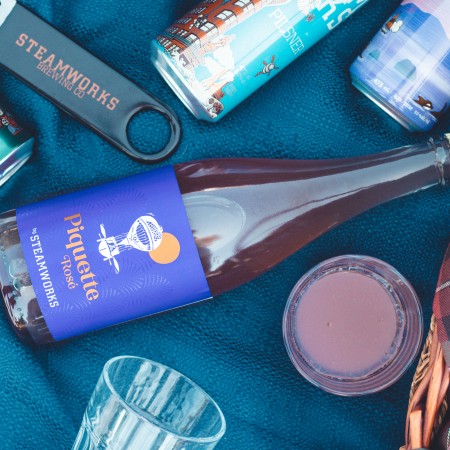 VANCOUVER, BC – Steamworks Brewing has announced the release of a new beverage that it declares to be “an exciting option for beer and wine drinkers alike!”

Made by adding water to the skins and other material left behind after grapes are pressed and fermenting the resulting liquid until it sparkles, piquette was traditionally made by vineyard workers as a way to give a delicious and refreshing second life to grape pomace.  Sadly for British Columbians, VQA rules prevent many of our local Okanagan vintners from producing atypical products like Piquette without forfeiting their VQA credentials, meaning the selection in our local liquor stores has been very limited. For the team at Steamworks, the opportunity to divert a small amount of this winery waste stream and experiment with a sustainable and unfussy product was an exciting prospect not to be passed up!

“When our team started thinking about piquette we realized it was a perfect product for our team’s skillset,” says Brett Jamieson, R&D Lead at Steamworks Brewing Company. “Piquette is unpretentious and easy-drinking in a way that made us think of beer, and it’s a wine that would be totally appropriate to break out at typical social occasions when diving into a bottle of 14-16% ABV wine might be a bit full-on.”

Steamworks Piquette is made with BC-grown Viognier and Cabernet Franc pomace, fermented with wild yeasts, and conditioned in bottle with Fraser Valley Honey and cultured m. reukaufii.

Steamworks Piquette will be officially launched next week, and will be available at select liquor retailers in British Columbia.