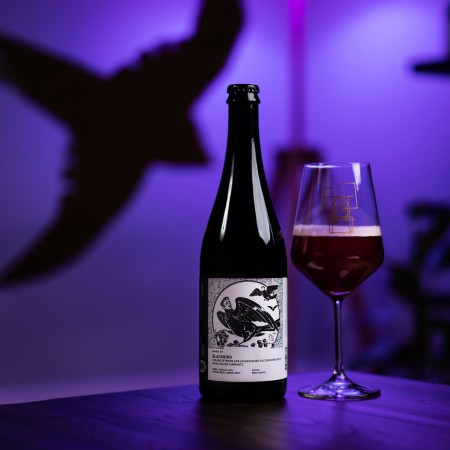 Blackbird (7.8% abv) is a blend of bruin and golden mixed culture beers with whole black currants, and is described as follows:

We used whole fruit to make this sweet nectar sing, and the currants are owed the credit for both its jammy intro and its pleasantly bitter, wine-like outro. Once fruited on bunches of berries from Saskatoon Farm, it continued its steeped learning curve by spending a couple more months in a blend tank, and a couple more in its bottles for good measure. By blending hecka fermented fruit with bruin and golden mixed culture beers, we unlocked a liberatingly genre-bending libation – one that marches to the beat of its own metronome. It’s tart, tannin-y, and toasty due to the berry juice, exocarp, and underlying malt cohesion, respectively. So, beer lovers, rejoice. Wine lovers, rejoin. Let’s meet in the intersection of the Venn diagram depiction of our palates and clink wine glasses full of this Pinot-Noir-looking beer. All before the Blackbird flies.

Blackbird is available now at the Establishment retail store and online shop.