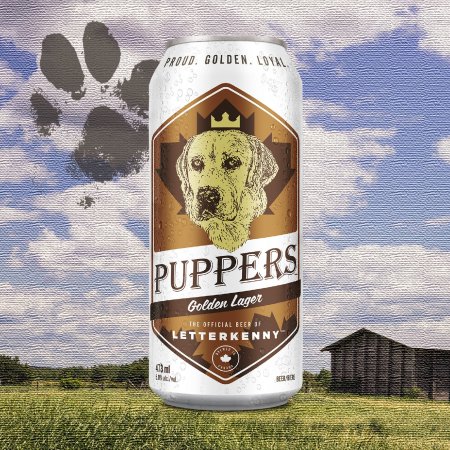 TORONTO, ON – New Metric Media, the producers of hit comedy series Letterkenny, have announced the return of the real world version of the beer brand featured on the show.

Puppers Golden Lager (5% abv) is being released in partnership with Labatt Breweries, and has the following tasting notes:

Made with pale and caramel malts and German Perle hops, Puppers is perfectly in balance between malt and hops and sweetness and bitterness. Slightly grainy and yeasty, this dark golden lager is perfectly balanced with a slightly drying, sulfur-toned finish.

“Our new partnership with Labatt is a significant step in the evolution of the Puppers beer brand,” said Mark Montefiore, President of New Metric Media, in a statement. “Labatt’s expertise and strong distribution reach will help get Puppers to a wider marketplace for Letterkenny fans and beer drinkers alike to enjoy all summer long and through 2021.”

A previous version of Puppers was released in 2017 by Stack Brewing in Sudbury, and was available for several years in Ontario, and briefly in Alberta.

The new Puppers Golden Lager will be on the shelves at LCBO, Beer Store, and Sobey’s locations in Ontario by July 1st.