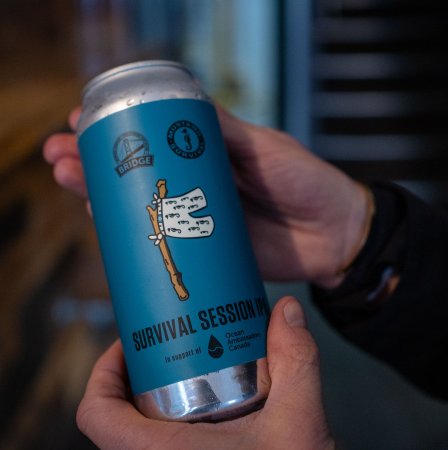 Survival Session IPA gets an attractive haziness from flaked oats, but it retains a low-malt flower and spice flavour with aromas of mandarin and grapefruit from the blend of Amarillo, Eclipse, and Topaz hops. At 4.2% ABV and a moderate 32 IBU, it’s refreshingly perfect for even the hottest days and deliciously sessionable for when the day’s stories are more than one beer long.

Survival Session IPA will be available soon at Bridge Brewing and select liquor stores, bars and restaurants in British Columbia. $2 from every 4-pack sold will be donated to Ocean Ambassadors, a local advocacy group dedicated to turning the tide on marine plastic pollution.

To mark the release of Survival Session IPA, Mustang Survival has profiled Bridge Brewing owner and lifelong sailor Leigh Stratton in the latest episode of its web series Life Beyond Land, which can be viewed now on YouTube.