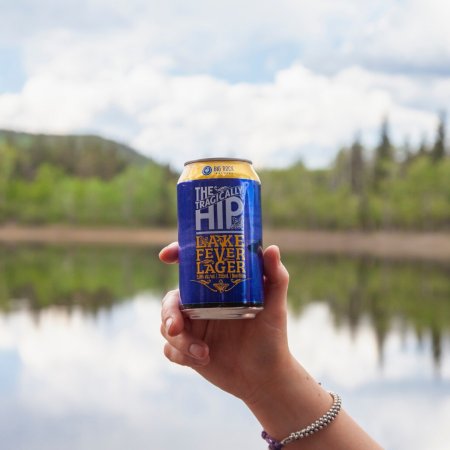 TORONTO, ON & CALGARY, AB – Big Rock Brewery and The Tragically Hip have announced that they have partnered for the release of a new beer.

Lake Fever Lager (5% abv) is described as a “clean, uncompromised lager with a golden colour and a very approachable hop profile.”

“This was a true collaboration in every sense as we worked together through several recipes to ensure the head, the colour, and the taste profile were exactly what the band was looking for,” said Wayne Arsenault, CEO of Big Rock Brewery, in a statement. “We couldn’t be prouder of Lake Fever Lager and the chance to work with a national treasure like The Tragically Hip.”

“We’ve harboured the ambition to release our own beer for a long time but could never find the right partner, until now,” added The Hip.  “Big thanks to the great folks at Big Rock, they’ve been amazing to work with. Over the last six months they have helped us develop a cleansing, thirst quenching lagered ale that is long on taste but still refreshing and crushable; perfect for those occasions when one or two is just not enough.”

Lake Fever Lager can be pre-ordered now via the Big Rock website for deliveries in Ontario, Alberta, and British Columbia. It will also be available starting this week in 12-packs of 355 ml cans at select beer retailers across Canada. Each pack will include a QR Code that can be scanned for the chance to win one of 20 prize packs from The Hip and Big Rock.