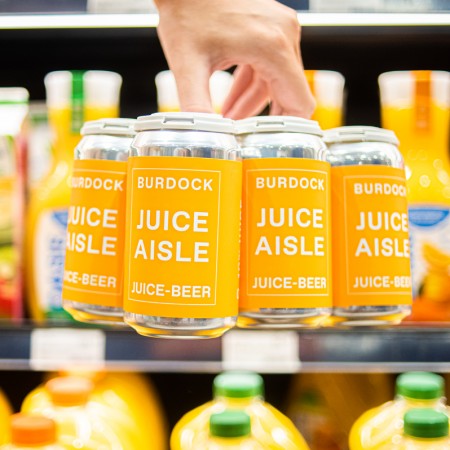 TORONTO, ON – Burdock Brewery has announced the release of a new and refreshing ale that’s infused with a whole lot of fruit juice.

This Pale Ale was made with 10% (by volume) fresh squeezed orange juice and a healthy serving of orange-zest (added cold-side). To be clear, this ain’t your cousin Jeff’s radler (get outta here with that stuff Jeff!), the orange juice was fermented out with the beer (read: it’s dry). Juice Aisle drinks like hoppy/tart pale ale masquerading as a jug of citrus. It’s lightly sour (not puckering) with all the acid supplied by the OJ rather than lactobacillus. Think Grovestand straight from the carton, a giant hand crushing a single clementine into a tiny glass, the sun setting behind a lone Orange Julius in the desert. Haters will say Juice Aisle is one small step in Burdock’s inevitable journey towards becoming a sparkling water and fruit juice packaging facility, and to them we say: “yeah, you’ve got a good point there.”

Juice Aisle is available now at the Burdock retail store and online shop.