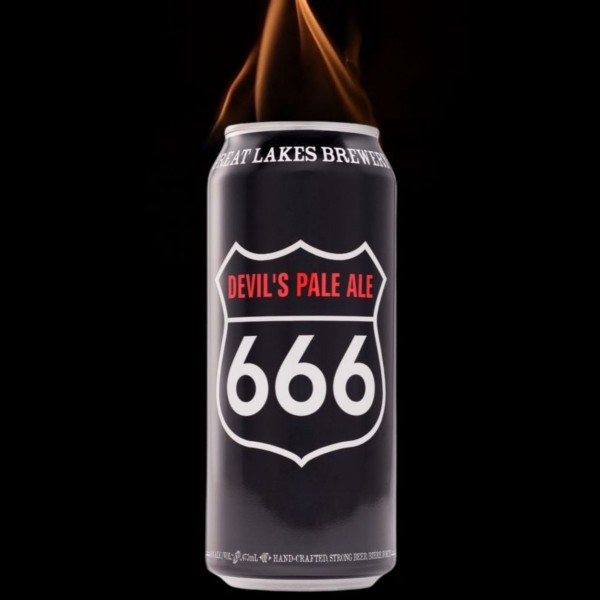 TORONTO, ON – Great Lakes Brewery has announced that it is bringing back a popular retired brand to mark the 15th anniversary of the beer’s debut.

Devil’s Pale Ale (6% abv) was introduced at the 2006 edition of Toronto’s Festival of Beer, and proved to be so popular that it quickly became a year-round brand. While it was discontinued in 2015, it made a brief return the following year for its 10th anniversary, and another in 2020 as a special Hallowe’en release.

Often called “666” due to the logo on its can, Devil’s Pale Ale is described as follows:

The Devil, perched upon the shoulder of one of our brewers, whispered, with intensity, “Brew me a beer with 6 premium malts and 6 varieties of hops, at 66 IBUs, and 6.6% abv.” The fire beneath the kettle bellowed. Dark clouds formed with each addition of west coast hops and specialty malts. Lightning flashed and thunder clapped. The brewer devised a plan. As the beer came to be, clouds parted, and pillars of sunshine beamed upon the brewhouse. The Devil may have coerced us into brewing this dark, bold and bitter Pale Ale, but the young brewer had made certain the beer did not contain all the 6’s the Devil sought, rendering any evil forces in this beer futile. After all, the Devil doesn’t brew beer. We do.

Devil’s Pale Ale will go on sale tomorrow (September 16th) at 4:00 PM at the Great Lakes retail store and online shop, and will roll-out on Friday to select LCBO stores across Ontario.