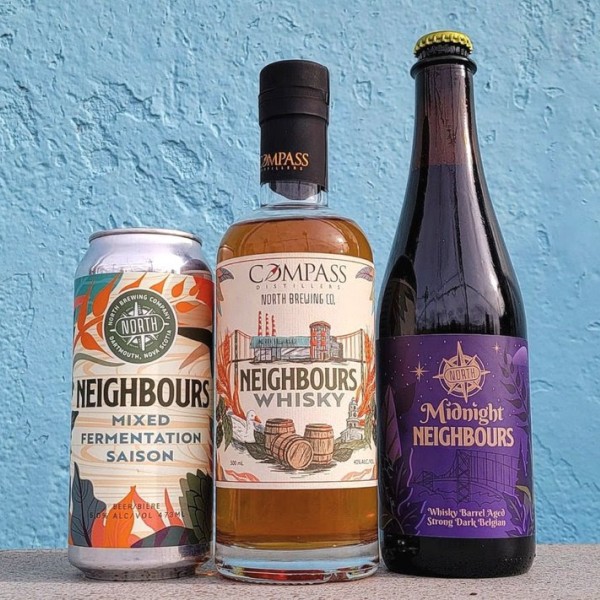 HALIFAX, NS – North Brewing and Compass Distillers have announced the release of a unique collaboration that dates back more than three years to when the brewery and distillery were both located on Agricola Street in Halifax.

The Neighbours project has the following history:

In early 2018, North Brewing and Compass teamed up to create a collaborative Whiskey: North would make a beer and Compass would distill and barrel age it. We decided to make a beer with interesting yeast and grain character to see how it would translate after being distilled.

North made 3000L of a mixed fermentation mixed grain saison and wheeled it down the street in a giant steel tote with a manual pallet jack (there is still a mark on the sidewalk from that possibly ill-advised, albeit very exciting, effort). Compass distilled and aged the beer for 3 years to create this unique whiskey.

The processes distillers use to ferment grains is very different from how brewers ferment and we wondered if we could yield a smooth whiskey in less time by starting with a beer as the base for a whiskey. We think the results were worth the effort and planning and we hope you enjoy it!

In conjunction with the debut of Neighbours Whiskey, North has released two companion beers – Neighbours Mixed Fermentation Saison (5% abv), a recreation of the original beer which is “lemony and orangey with a lightly peppery finish”; and Midnight Neighbours (12% abv), a strong Belgian dark ale that was aged in the Neighbours Whiskey barrel once it was emptied, and features flavours of “cherry, chocolate, vanilla, oak and notes of whiskey.”

Neighbours Whiskey is currently available at the Compass retail store and online shop, and the two beers are in stock now at all three North locations and the brewery’s online store.