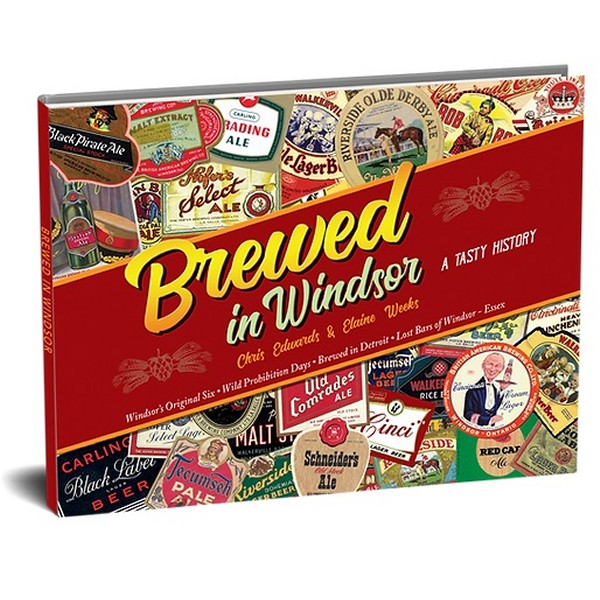 WINDSOR, ON – A new book focused on the history of brewing in Windsor, Ontario and the surrounding area is now available from Walkerville Publishing.

Brewed in Windsor: A Tasty History has been written by Chris Edwards and Elaine Weeks, local historians and authors of nine books about the history of Windsor and Detroit. It’s described as follows:

“Brewed in Windsor” is the story of the rise and fall of Windsor, Ontario’s Original Six breweries. It is an tale of brewmasters, risk-takers, gangsters, roadhouses, and the transformative impact of Prohibition on Windsor’s brewing industry.

While Windsorites did their fair share of beer drinking, thirsty Americans across the Detroit River became local brewers’ best customers during Prohibition, when Detroit’s breweries were forced to shutter their doors even as Windsor’s beer makers continued to produce and “export” its tasty products.

Strategically situated just a mile away from the United States, not only did Windsor once ship boat loads of beer to Americans, this border city became a magnet for American revelers seeking the illicit pleasures of Windsor’s spectacular roadhouses, each a glittering jewel, like a diamond-studded bracelet. In addition, this book sheds light on the numerous drinking establishments that seemed to once be located on practically every commercial street in the city.

The 160-page hardcover includes more than 500 photos, including beer and brewing memorabilia from the collection of Bill Marentette, a friend of Edwards and Weeks who passed away in January.

Brewed in Windsor: A Tasty History is available now for $24.95 direct from Walkerville Publishing, and at select book and gift shops in Windsor-Essex.