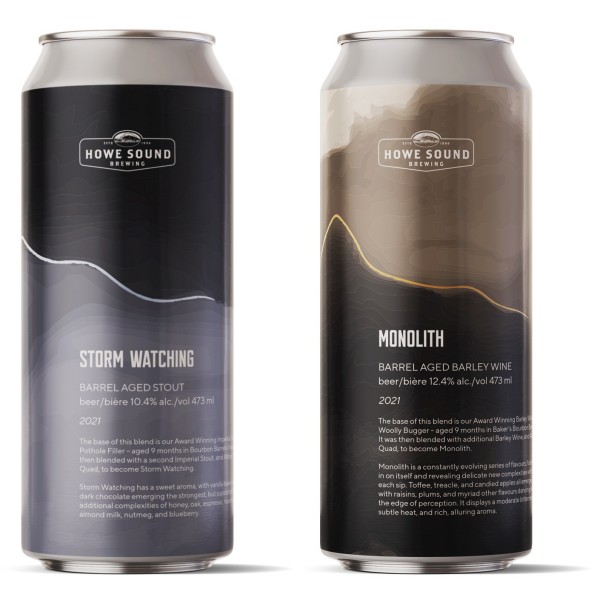 SQUAMISH, BC – Howe Sound Brewing has announced the release of a new pair of limited edition barrel-aged and blended beers.

The base of this blend is our award winning Pothole Filler Imperial Stout aged 9 months in bourbon barrels. It was then blended with additional Imperial Stout and Abbey Quad to become Storm Watching. It has a sweet aroma, with vanilla bean and dark chocolate emerging the strongest, but supported by additional complexities of honey, oak, espresso, hazelnut, almond milk, nutmeg, and blueberry.

The base of this blend is our award winning Woolly Bugger Barley Wine aged 9 months in Baker’s bourbon barrels. It was then blended with additional Barley Wine and Abbey Quad to become Monolith. It features a constantly evolving series of flavours, folding in on itself and revealing delicate new complexities with each sip. Toffee, treacle, and candied apples all emerge, with raisins, plums, and myriad other flavours dancing on the edge of perception. It displays a moderate bitterness, subtle heat, and rich, alluring aroma.

Both beers are available now at the Howe Sound retail store and online shop while supplies last.