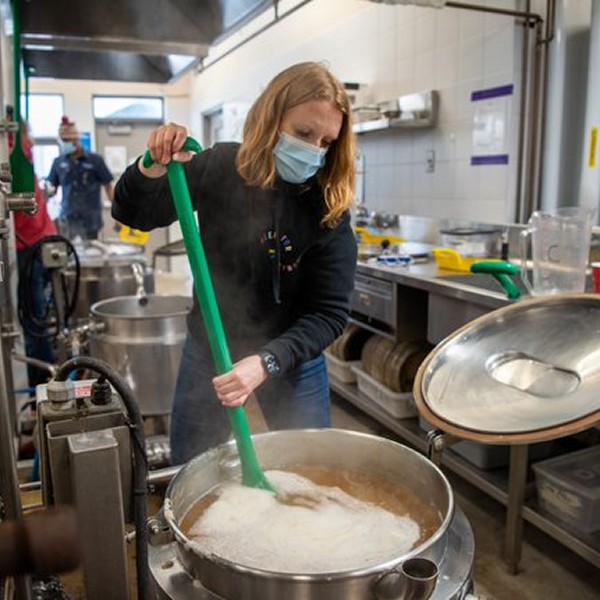 NIAGARA-ON-THE-LAKE, ON – Niagara College Teaching Brewery has announced its participation in an international brewing collaboration that aims to “create a safe and discrimination-free beer industry, especially for women, BIPOC, and LGBTQIA+ individuals, through inclusive environments and transparent policies.”

Brave Noise Pale Ale has been spearheaded by Brienne Allan, a former employee of Notch Brewing who triggered a #MeToo-style reckoning last year when she opened up her Instragram account to stories of harassment and discrimination experienced by those in the craft beer industry.

The College’s involvement in the Brave Noise project was coordinated by Angela McCallum (pictured above), a fourth-term student in the Brewmaster and Brewery Operations Management program.

“The promotion of safe and inclusive workplaces and equality within the craft beer industry is critically important. If our involvement can make even a small impact, it’s absolutely worth it,” said McCallum in a statement. “It’s important for brewers to acknowledge these issues as early in their career as possible, so it makes sense for us to learn about and get involved with Brave Noise while we’re still students.”

“Through the Brave Noise Collaboration we are supporting a vital movement looking to improve the industry and encourage and support those who are in it, and those who want to be,” added Jon Downing, Brewmaster of the Niagara College Teaching Brewery.

Brave Noise has been brewed by more than 200 breweries around the world, with each brewery including a QR code on the label that links to their Statement of Values or Code of Conduct, and donating the proceeds to an organization that supports the mission of the collaboration.

The Niagara College version of Brave Noise was brewed last week by a group of students in the program, as well as Ren Navarro of Beer. Diversity. It is expected to be released in mid-March, and is being dedicated to a former student who left the program last term to focus on her transition journey.