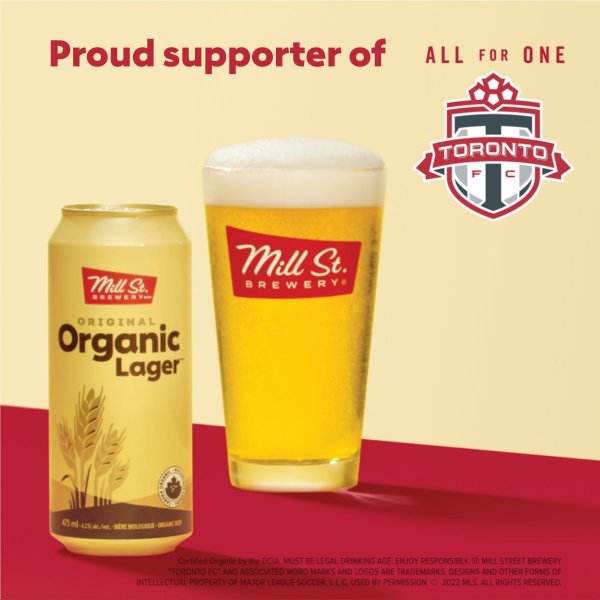 TORONTO, ON – Labatt Breweries of Canada and Maple Leaf Sports & Entertainment (MLSE) have announced a new partnership that sees the Labatt-owned Mill Street Brewery named official beer of MLSE’s Toronto FC (TFC), as well as the lead beer brand at BMO Field for the 2022 season.

“As a Toronto-based craft brewer, it’s a milestone moment for us to now be the official beer of Toronto FC and represents a monumental new chapter in our humble success story,” said Daryl Minor, President Mill Street Brewery & Brickworks Ciderhouse, in a statement. “This partnership showcases the synergies behind two deeply proud Toronto-based brands, and we look forward to creating new experiences for the dedicated fanbase to continue to cheer on their beloved team.”

In addition to having Mill Street beer available at TFC home games, the partnership also includes: TFC Watch Parties for away games hosted at the Mill Street Brewpub in Toronto’s Distillery district; a limited edition #AllForOne Beer Series to be released at the Brewpub throughout the TFC 2022 season; sponsorship of TFC’s fan-voted Man of the Match award; and an in-stadium beer garden and other brand activations at BMO Field.

“Mill Street Brewery is a homegrown brand and is ingrained in the fabric of the city as much as Toronto FC is, and as the team enters their 16th season, the partnership will bring exciting opportunities for our fans,” said Jordan Vader, Senior Vice President, Global Partnerships at MLSE. “Our supporters are the driving force behind TFC, and we’re excited to continue enhancing their experience in and outside of the stadium with partners such as Mill Street.”