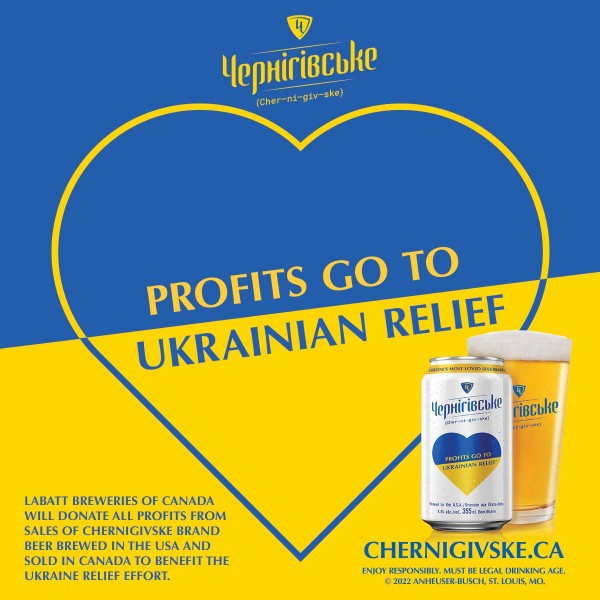 TORONTO, ON – Two months after it was first announced, Labatt Breweries of Canada has released a beer in partnership with other AB InBev owned breweries around the world to raise funds for war relief efforts in Ukraine.

Chernigivske (4.8% abv) is described as follows:

Chernigivske is Ukraine’s most-loved beer and part of AB InBev’s global portfolio of brands. The beer is named after the city Chernihiv and has been brewed in Ukraine since 1988. Since its inception, Chernigivske has celebrated Ukraine’s history, culture, and people. Taking inspiration from the original recipe, our Chernigivske-inspired beer is a crisp medium bodied European-style pale golden lager with subtle fruity notes and a moderately bitter finish.

The North American edition of Chernigivske has been brewed at the Anheuser-Busch facility in Newark, New Jersey, and is rolling out now to beer retailers across Canada.

Gross profits from Chernigivske sales in Canada will be donated to CARE’s Ukraine Crisis Fund, part of a minimum $5 million donation that AB InBev will making to various humanitarian aid organizations in the region.