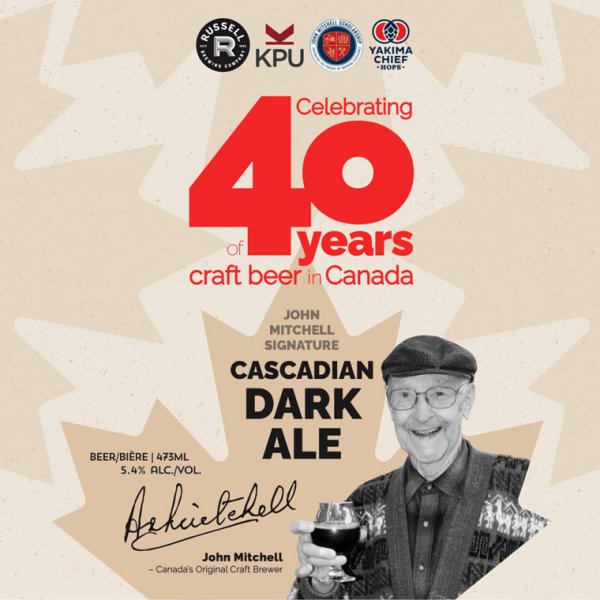 SURREY, BC – Russell Brewing and the Kwantlen Polytechnic University (KPU) have announced the upcoming release of a collaborative beer honouring a pioneer of Canada’s craft brewing industry.

The beer was brewed at Russell on June 8th with participation from students, staff, and alumni from the KPU Brewing & Brewery Operations Porgram, including graduates who are now working at other BC breweries including Bomber, Curious Creatures, Dead Frog, Farm Country, Five Roads, Northpaw, and Patina. 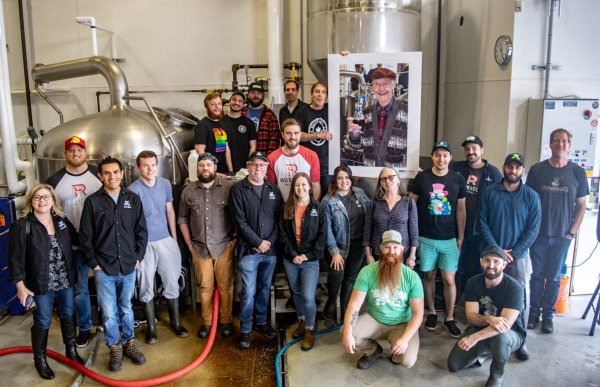 The press release gives the following details about the beer:

Of the new beer recipe, KPU alum Mark McBride reveals that he wrote it taking inspiration from Mitchell’s ESB recipe, as well as Mount Tolmie Dark Ale from Mitchell’s time as founder of Spinnakers Brewpub. “Combining these elements,” McBride notes, “We decided it would be a cool idea to brew a CDA.”

Head Brewer Graham Kenny confirms, “We had access to John’s old brew sheets from Horseshoe Bay Brewing and had a look at his first ever brew sheet. We took notes and guidance from that in creating this beer.”

Kenny points out the use of whole leaf Cascade hops in the brew for tradition’s sake. “They weren’t the easiest thing to track down,” he shares. “I managed to get some shipped up from Yakima Chief Hops and they were fun to brew with.” No doubt John Mitchell, always a fan of whole hops, would have approved.

John Mitchell Signature Cascadian Dark Ale will be launched at the recently opened Russell Brewing Tasting Room on Wednesday July 6th, 2022, marking the 40th anniversary of the release of Bay Ale, the first beer to be brewed by Mitchell at Horseshoe Bay Brewing.

Sales proceeds will go toward the John Mitchell Legacy Endowed Scholarship for students in the KPU Brewing & Brewery Operations Program.