VANCOUVER, BC – Granville Island Brewing has announced updates to its product range and branding that “reflects the great tasting beer it’s been proudly serving to customers since 1984.”

In addition to giving a full overhaul to the brewery logo and packaging design, Island Lager (5% abv) – Granville Island’s first ever beer – has returned to the brewery’s core line-up alongside English Bay Ale (5% abv), Kitsilano Juicy IPA (5.5% abv), and Brockton West Coast IPA (6.5% abv), all now sporting names of “popular Vancouver neighbourhoods that can be seen from the brewery.” 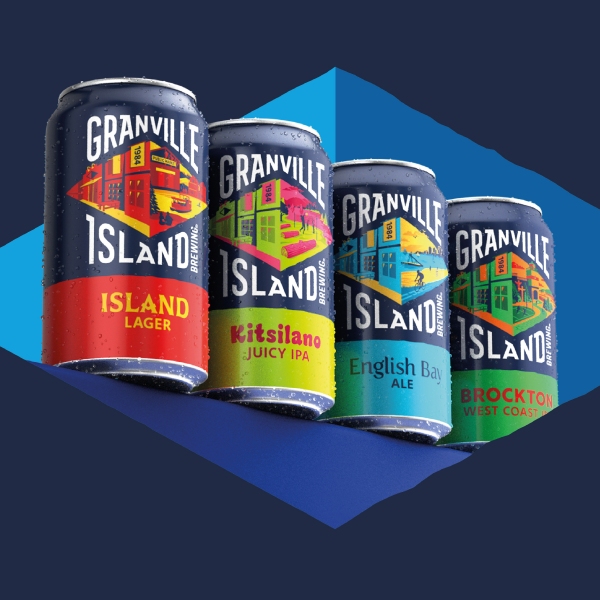 “When we first opened in 1984, we were one of the only microbreweries in the country that was offering locally handcrafted, premium beers,” says Granville Island Brewing founder Mitch Taylor in a statement. “While the local craft beer scene has grown tremendously since then, Granville Island Brewing has remained a leader in crafting great quality beer that is inseparable from the West Coast and the diverse people who live here.”

“When we were reimagining our visual identity, we really considered the connection Granville Island Brewing has to people who live here and the unique passions that tie them together,” adds Brand Manager, Brendan Dalton. “People who live in B.C have a love for craft beer that goes hand-in-hand with their passion for getting out, and doing the things they love. This insight really played into our new brand direction, and you’ll see it reflected in the new packaging.”

The new look Granville Island beers are available now at the brewery, and select beer retailers in British Columbia and across Canada.