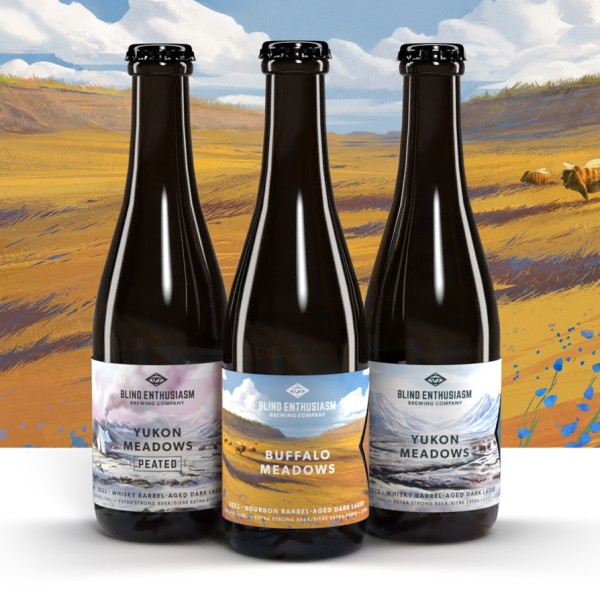 EDMONTON, AB – Blind Enthusiasm Brewing has announced details of three barrel-aged dark lagers that will be released this weekend to mark the brewery’s 5th anniversary.

You can’t miss the return of our first ever barrel-aged beer! 2022 Buffalo Meadows is a dark lager that was cool-fermented in stainless steel with Alberta blossom honey and bee pollen from Meadow-Sweet Apiaries. It was then aged for 10 months in fresh Buffalo Trace bourbon barrels.

Yukon Meadows was made using Two Brewers Whisky barrels which we secured thanks to our Market head brewer’s history in the Yukon. The base beer is the same recipe across all Meadows releases. This beer is rich and chocolatey with a gentle boozy warming finish.

2022 Yukon Meadows (Peated) was made using Two Brewers Whisky barrels. The peat in this beer is prominent, but not overpowering; it melds delightfully with the warming alcohol and rich roasty malt.

All three beers will be released on Sunday September 18th at Biera/Biera Market and The Monolith. For more details, see the full announcement on the Blind Enthusiasm website.