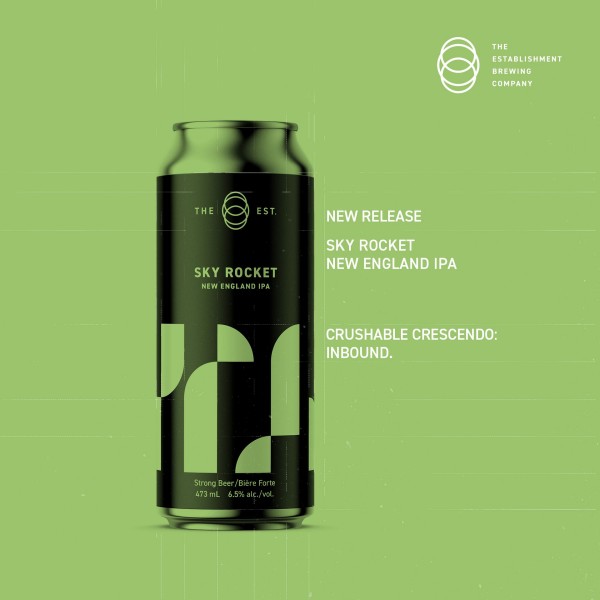 CALGARY, AB – The Establishment Brewing Company has announced the release of the latest in its Sky Rocket series of New England IPAs – and the first to not have a numeric qualifier in its name.

Sometimes to find your way you’ve gotta retrace your steps. Pseudo-similarly, we’ve walked back the numerical to make the final iteration of our Sky Rocket series stand alone and unquantified.

As a whole, this beer is a beautiful and balanced constellation, but within it? The shiniest star’s gotta be Citra, the hop that in our eyes (and noses and palates) is super hard to beat with its inviting zesty tropical notes. And, on the topic of hops, Sky Rocket is hopped higher than VI, but clocks in with a lower ABV for higher crushability. Because we believe the choicest hops are the ones you choose yourself, with this vessel and all those going forward, we have the singular pleasure of picking our own hop lot by working directly with producers.

Its gold star taste is teased at by its bright, hazy yellow hue. In fact, in the middle of a cold dark night—and the right Christmas light—you could even say it glows. Hopefully the thought of lovin’ this has got you so excited.

Sky Rocket is available now at the Establishment retail store and online shop.