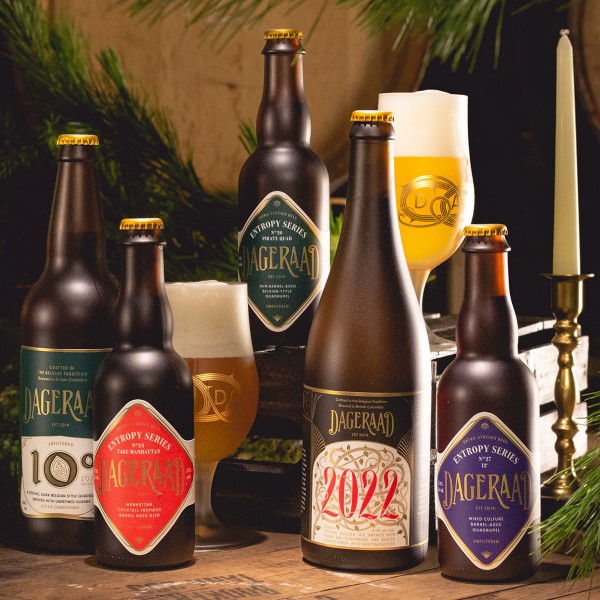 BURNABY, BC – Dageraad Brewing has announced details of five new and returning beers to help celebrate the holiday season, including a couple of the strongest ales to ever come out of the brewery.

Inspired by the Manhattan cocktail, this blond ale was aged in a combination of rye whiskey and port-finished bourbon barrels for 14 months with diastatic yeast before being blended with cherry juice, merlot grape must and aromatic spices.

We aged our 2021 batch of 10° Quadrupel for 14 months in South American rum barrels. The beer soaked up enough rum from the staves of the barrels that it is now the strongest beer Dageraad has ever made.

We brewed an extra-strong quadrupel and aged it for seven months in oak barrels with a blend of saccharomyces, brettanomyces, and lactic acid bacteria.

Dageraad 10° is our secular homage to the strong, dark ales brewed by Trappist monks in Belgium. The strength of the wort and the addition of exotic, unrefined sugars has tormented the yeast into producing magnificently complex fruit and spice notes to complement the beer’s malty profundity. Its flavour will develop for up to three years in the bottle if properly stored.

Anno 2022 is a strong, golden ale brewed with Okanagan pears and Indian coriander. The beer is bottle conditioned with Brettanomyces claussenii, a strain of wild yeast that adds funky, fruity flavours and slowly develops over time in the bottle, preserving freshness and adding layers of complexity as the beer ages.

All five beers are available now individually and in several gift pack configurations at the Dageraad tasting room and online shop.