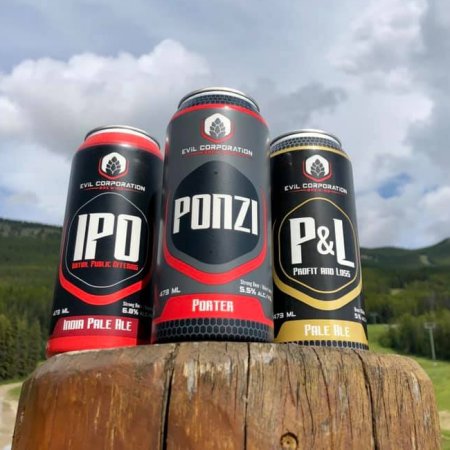 CALGARY, AB – Evil Corporation Brewing has announced the launch of its third brand.

Invest your hard-earned cash in this particular Ponzi, and your tastebuds will be rewarded a hundredfold. Cash in your flavour dividend and announce it to the world so they too can enrol in a scheme with guaranteed returns every time. As you decant your first Ponzi, your glass will be splashed a rich mahogany with subtle amber tones and a creamy white head. Our Ponzi is a classic full-bodied Porter with taste undertones of chocolate and coffee balanced by a clean fleeting bitterness and understated aromas of flora and spice.

Established last year with a mission to “brew the best beer possible but at the same time skewering business speak and the connotations that come with it,” Evil Corporation is currently producing its beer under contract at Last Spike Brewery.

Ponzi Porter – as well as the company’s previous releases, Initial Public Offering IPA and Profit & Loss Pale Ale – is available now in cans at select liquor stores and on tap at craft beer bars in Calgary.