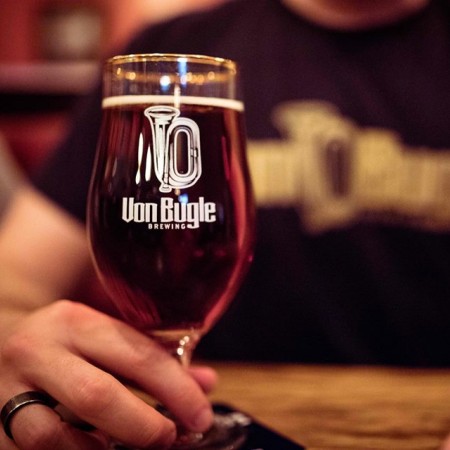 TORONTO, ON – Steam Whistle Brewing has confirmed that an off-shoot brand it launched two years ago has been discontinued, and the affiliated taproom and retail store at its Etobicoke brewery has been officially shut down.

Von Bugle Munich Lager debuted in May 2018, and was a German-style amber lager described as being “smooth and perfectly balanced between gentle bitterness and malt sweetness.”

It’s launch was followed by the opening of a Von Bugle-branded brewery and taproom on Evans Avenue in Etobicoke. The taproom has been closed since the start of the COVID-19 pandemic in the spring, and is now confirmed to be shuttered permanently.

As for the brewery, Steam Whistle rep Devon Gleed notes that it has been producing the majority of Steam Whistle Pilsner since its opening, and it will continue to be used for that purpose with the former taproom now in use as a staff room.

These changes do not affect operations at the original Steam Whistle location in the Roundhouse on Bremner Boulevard. Brewing continues there, and while the taproom and biergarten are currently closed due to the COVID-19 lockdown, they will reopen when those restrictions are lifted with a new winter-friendly outdoor dining area.