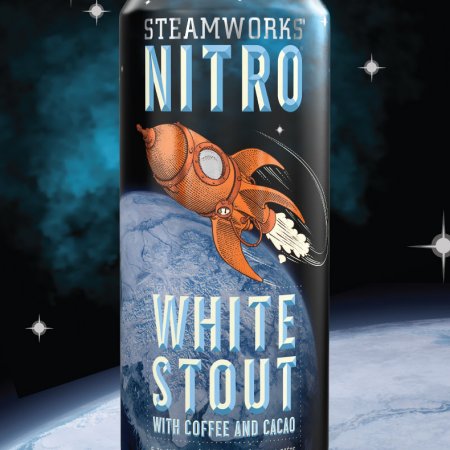 VANCOUVER, BC – Steamworks Brewing has announced the release of the second in a series of nitrogenated canned beers, following the launch of Nitro Stout last autumn.

Nitro White Stout (5.1% abv) is a nitro-laced update to a previous seasonal release, and is described as follows:

Steamworks Nitro White Stout boasts a rich body with coffee and chocolate flavours yet pours a light cascading golden colour with a dense white head. The brew brings rich typical stout flavours and body imparted from oats and barley, but without the dark coloured, roasted malts traditionally used in a stout. Instead, these roasted notes come from aging the beer with cold brew coffee from Pallet Roasters and cacao beans from East Van Roasters. The result is a deliciously unexpected brew perfect for west coast winters.

Nitro White Stout is available now in 4-packs of 473 ml cans at both Steamworks locations, and soon at select private liquor stores throughout British Columbia.