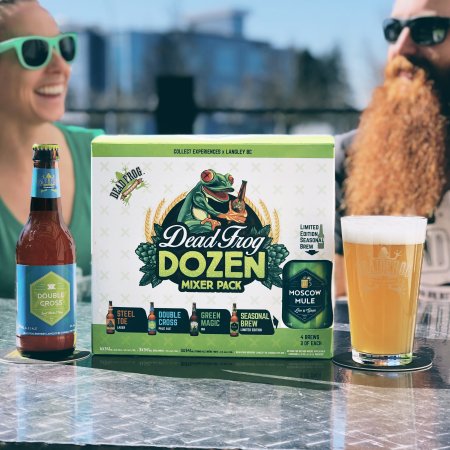 ALDERGROVE, BC – Dead Frog Brewery has announced the release of the latest edition of its rotating sampler package, as well as a pair of returning seasonal brands.

Moscow Mule is described as “a refreshing white ale with a fresh squeeze of lime, crushed ginger, and a crisp, easy drinking finish.” In addition to being featured in the Mixer Pack, it’s also available in 4-packs of 473 ml cans.

Double Cross is brewed with two local malts and two local hops, and is a “crisp golden pale ale with a clean malt base and refreshing burst of citrus hops.” It will be available year-round exclusively in the Mixer Pack, as well as on tap at select bars and restaurants.

Also back for the spring and summer is Blueberry Blast Kettle Sour (5.9% abv, 5 IBU), described as “a crisp sour wheat ale with a clean and dry malt base, brisk flavours of lemon and fresh picked blueberries, and a refreshing tart finish.” It can be found in 650 ml bottles and on tap.

A launch event for the new seasonal releases will be taking place tomorrow (March 23rd) at the Dead Frog taproom, where they’ll also be debuting new chicken wings in various flavours. For more details, see the full announcement.