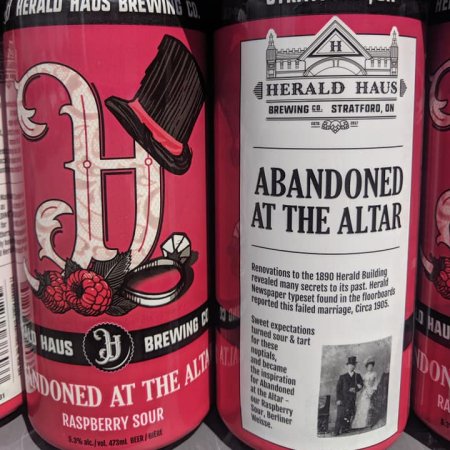 STRATFORD, ON – Herald Haus Brewing has announced that one of the most popular beers in its core draught line-up is now available in cans for the first time.

Abandoned At The Altar Raspberry Sour (5.3% abv) is described as follows:

Our version of a dry-hopped Berliner Weisse. A German wheat beer featuring a light body and assertive tartness united with a modest dose of fresh raspberries. It pours blushing red with a silky head while boasting a vibrant raspberry, lemon and faint mango character – finishing dry and crisp.

Abandoned At The Altar is available in 473 ml cans at Herald Haus, select Beer Store locations, and several bars and restaurants in Southwestern Ontario.