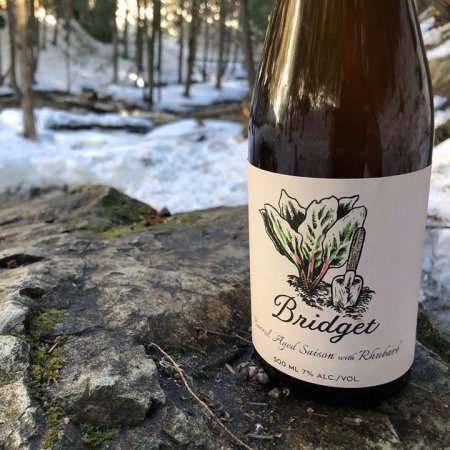 HANWELL, NB – Niche Brewing has announced the release of a new beer that is “dedicated to all of the amazing women in our lives.”

Bridget (7% abv) is a barrel-aged Saison with rhubarb that is described as follows:

This beer was originally designed by Rob, back in his pre-Niche homebrewing days. After a trip to his home town of Labrador City for a visit, he brought some rhubarb from his grandmother Bridget’s garden, which he used in a Saison. We’ve scaled up that recipe and fermented it with our house culture of Saccharomyces and Brettanomyces strains, and aged it in one of our Chardonnay barrels. It was then conditioned on rhubarb puree, as well as some of the remaining rhubarb from Bridget’s garden. The final beer weighs in at 7% ABV, and is tasting funky and tart, with some complex rhubarb character to complement

Bridget is being distributed this week to select ANBL stores, and is also available to order for delivery via Drink NB.